To follow up on last week’s post showing how women are still more likely to be working multiple jobs than men (both among the employed and among their total populations), here’s a reminder that not all women are the same. Let’s look at multiple jobholders as a share of employed, across race and age categories.

There are many factors that could explain the differences by race, probably most significantly that Black women are more likely to be sole earners in their households (as well as single parents) yet also more likely to earn lower hourly wages. The different trends by age reflect that multiple part-time jobs are often the closest a young adult (even a college-educated one) can come to a full-time job–and that the human-service-intensive jobs many young women work in were the ones that disappeared the most at the start of the pandemic and have not and will not likely fully come back even when the public health crisis eventually wanes. The Pandemic Recession — or “She-cession”– has not just been hard on women because of the severity of the lowest depths of job loss experienced, but because it’s really “jerked around” the women who were already the most economically vulnerable. 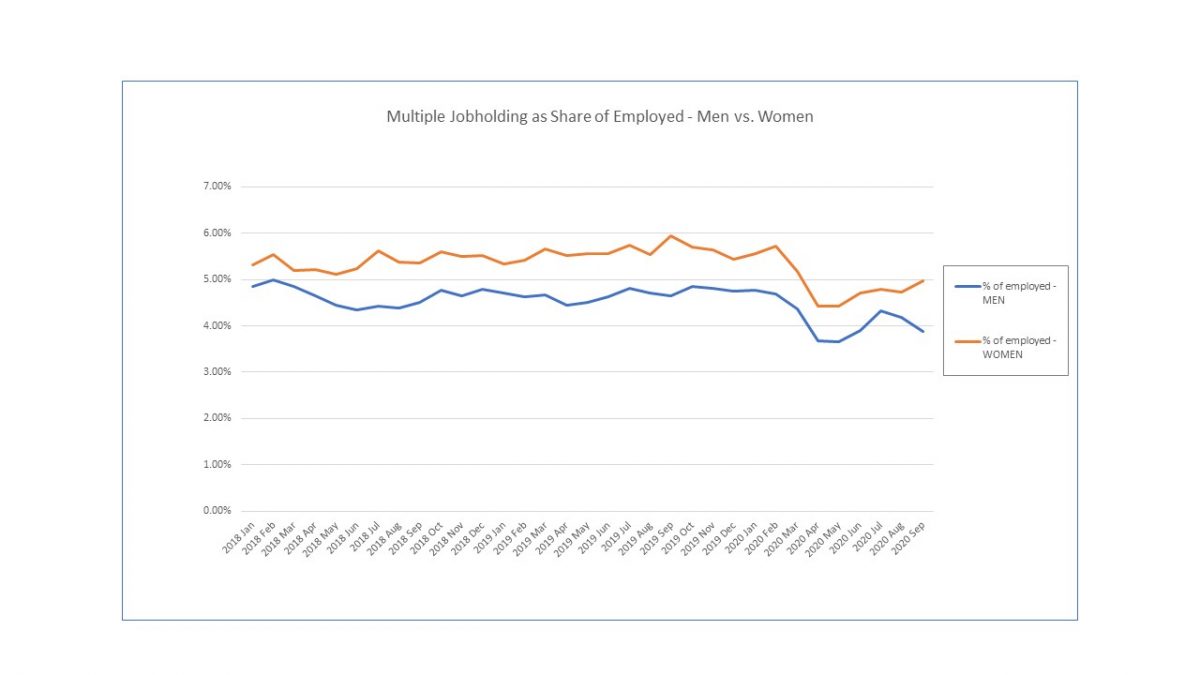 10/22/20: Belated UPDATE through September data to charts below, originally shared on Twitter here. (I’ll make future updates here as well in order to keep in one place where some might look thanks to the new Center for American Progress report by Mike Madowitz and Diana Boesch published today.)

Today the BLS released their monthly “Employment Situation” report –and the report’s underlying data (which you can access here), including numbers on Asian women separated from Asian men which are not included in the report. Here’s a small, mostly quantitative update to my original post (with Mina Kim) from last month. First, the bottom-line/main-story bar chart:

… and below, the updated table with detailed unemployment stats by race and gender:

One thing I decided to adjust in the bar chart and add as note to the table is that April 2020 was when the unemployment rate peaked for the workforce overall as well as for most of the race-gender categories–except that the peak for Asians (both men and women) and for Black women (and Black overall but not Black men) happened in May. So the bar chart compares the absolute change in unemployment rate during the (aftermath of the) Great Recession compared with the change from this February to either April or May–whichever was the worst point for each race-gender category.

Some findings worth highlighting (or repeating):

As I hinted at in my first post on this subject, there are many different possible explanations for why this Pandemic Recession has been so hard on women (it’s the “She-cession”) and Asian women in particular. The intersection of Asian and female provides a uniquely-focused lens into what’s so different about this recession and how it’s affecting all workers through the roles and demands that Asian women just happen to disproportionately represent. To be continued!