I never posted my tables and charts through the December report (released first week of January) here. In a few minutes we get the January numbers, so here’s the bottom line as of the end of 2020: the so-called “She-cession” with female unemployment exceeding male only still held among *Asian* women as of the end of 2020! Here’s the table which underscores how we can’t generalize about how women vs. men are doing–or how anyone in the economy is doing–based on our usual aggregate and average statistics. I’ll have more to say on this topic of the need for more granular data in the future, maybe even this coming week when I next update employment stats based on the numbers we’re about to see. 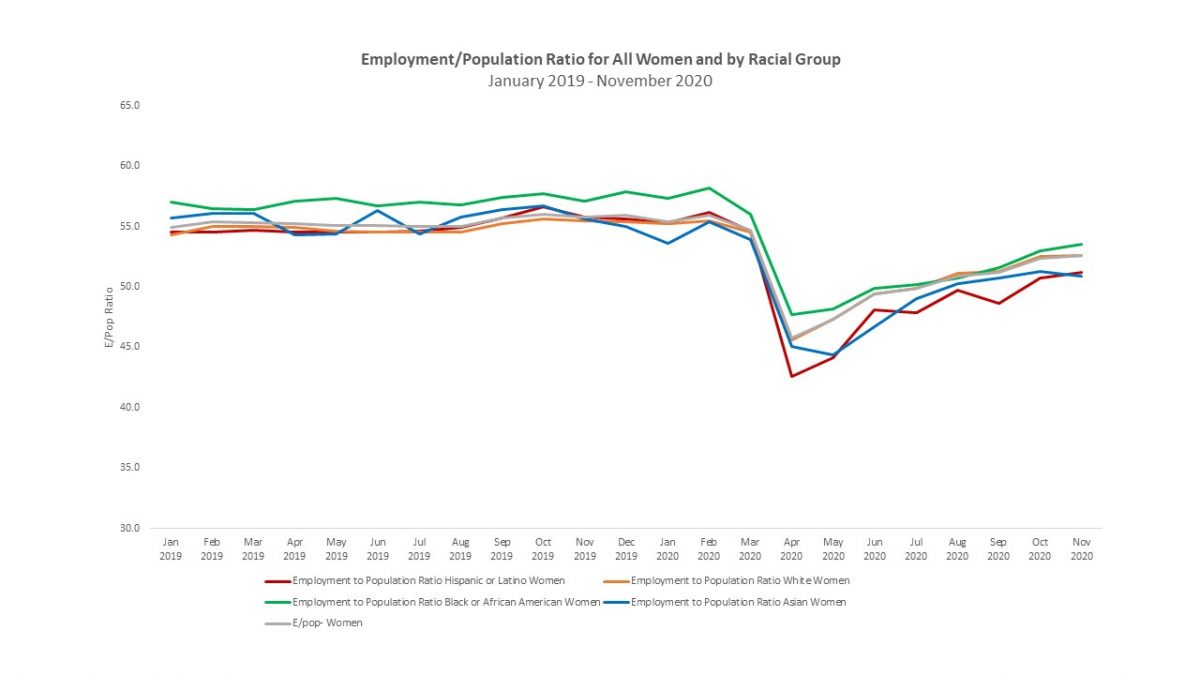 With Joe Biden having won the presidency as of yesterday (11/7/20), the new labor market data that came out the day before was amazingly aligned with voting patterns, which show men more often voting for Trump, women and especially women of color more often voting for Biden, and Trump (vs. Biden) voters more likely to put the economy (vs. the pandemic) as their biggest concern. The Bureau of Labor Statistics’ report on the monthly employment situation, and their underlying survey data (not all published in the report but accessible here and here) show that while the labor market continues to improve since its worst point this spring, the continued severity of the pandemic continues to weigh on women’s work far more than men’s. The “SheCession” (or is it “She-session” as Heather Long of the Washington Post recently called it… either works to me) is still an acute condition, particularly for women of color.

The larger toll of the pandemic on working women doesn’t just show up in the unemployment rate measure–which is still nearly double its February pre-pandemic rate and which can be misleadingly reduced when people drop out of the labor force entirely, which reduces the numerator (# of unemployed) by a larger proportion than the denominator (# in labor force = # unemployed + # employed). The “SheCession” also shows up in the employment-to-population (E/Pop) ratio:

And the SheCession shows up in the multiple jobholding data, where working women more commonly than men work two or more jobs (as has always been true because women more commonly work part-time rather than full-time jobs whether by preference or not), but in the pandemic recession have had to piece together and juggle multiple jobs along with their unexpected and unpredictable caregiving responsibilities at home. Note that during the pandemic we have seen the distribution of multiple jobholding among women widen across both race and age categories–with Black women and the youngest women most likely to be working multiple jobs:

To follow up on last week’s post showing how women are still more likely to be working multiple jobs than men (both among the employed and among their total populations), here’s a reminder that not all women are the same. Let’s look at multiple jobholders as a share of employed, across race and age categories.

There are many factors that could explain the differences by race, probably most significantly that Black women are more likely to be sole earners in their households (as well as single parents) yet also more likely to earn lower hourly wages. The different trends by age reflect that multiple part-time jobs are often the closest a young adult (even a college-educated one) can come to a full-time job–and that the human-service-intensive jobs many young women work in were the ones that disappeared the most at the start of the pandemic and have not and will not likely fully come back even when the public health crisis eventually wanes. The Pandemic Recession — or “She-cession”– has not just been hard on women because of the severity of the lowest depths of job loss experienced, but because it’s really “jerked around” the women who were already the most economically vulnerable.